​The following headlines have been reprinted from The Penn Wealth Report and are protected under copyright.  Members can access the full stories by selecting the respective issue link.  Once logged in, you will have access to all subsequent articles.
Yes, China is weakening its currency, but there are several factors at play. (23 Jul 2018) The Trump Administration has leveled a charge that the Chinese government has been devaluing its currency, the yuan, in an effort to prop up its global exports in the face of real and proposed US sanctions. The weaker a country's currency gets, the cheaper its products become for other countries to import. While there is no doubt that the government has been purposefully devaluing the yuan, which is now worth about $0.15 on the dollar, a slowing of China's economy has also played a factor. Couple that with the roaring US economy and the Fed raising interest rates, and the yuan's slide makes more sense. As for China, a weak currency is a double-edged sword. A weak currency can help bring about inflation, and it hurts the buying power of a nation's citizens. It also presents a less attractive environment for investors, pushing them toward countries with stronger currencies e.g. away from the yuan and toward the US dollar. If Larry Kudlow is right, Xi Jinping has no interest in negotiating a more-balanced trade deal with the US. If he is relying on the forces of a weaker yuan to come to his rescue, he might just be surprised at how quickly those forces can be decimated—"leader for life" moniker or not. ​​
Bitcoin plunges another 20% in early trading, now down 40% from high
​(16 Jan 2018) Just about the time we began receiving increased call volume on bitcoin as an investment, the bottom dropped out of the digital currency. Peaking at $19,780 a few days before Christmas, the cryptocurrency was trading below $12,000 in early Tuesday trading—a 40% drop. So what's the most recent pin prick in the bitcoin bubble? Increased regulation by governments around the world, and an increasing belief that the currency is, indeed, a bubble waiting to burst. South Korea's government has considered banning all bitcoin trading, which would have a major impact on the market considering the country's citizens are responsible for about one-third of all bitcoin transactions. The vice chair of the People's Bank of China also issued warnings and hinted of a crackdown in an internal bank memo. How did the other cryptocurrencies deal with bitcoin's plunge? They traded down in sympathy. More evidence that the real gold mine in digital currencies revolves around the blockchain technology, not the invisible coins. 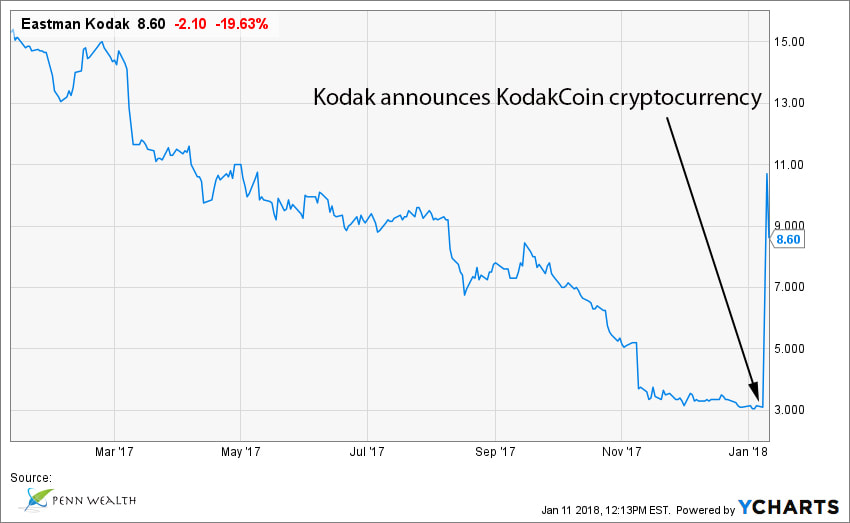 Need more proof that cryptocurrencies are a bubble waiting to burst? Consider Kodak...
​(11 Jan 2018) When you hear the word Kodak, what do you immediately think of? For most of us, the iconic (and outdated) Kodak camera or those cylindrical rolls of yellow and black film come to mind. Not anymore. The long-beleaguered imaging company (KODK $3-$9-$16), whose stock price has been steadily declining for years, decided that it would create and begin mining its own cryptocurrency. From film to currencies? How did investors react to the news? KODK spiked from $3.10 per share to over $11 per share almost instantly (though the price has fallen back to $9.40 as of the time of this writing). KodakCoins are tokens inside of the blockchain technology KodakOne platform, with the tokens being used by photographers to make and receive payments. We can see cannabis companies creating their own cryptocurrencies next (actually, they probably already have). As crazy and out-of-control as all of this is, the underlying blockchain technology, we believe, will actually transform the Forex landscape forever.
Bitcoin plunges 25% as cryptocurrencies get hammered around the world
​(22 Dec 2017) Following a massive selloff of the digital currency in Asia, the Bitcoin Investment Trust (GBTC $102-$1,772-$3,523) was down nearly 26% in pre-market trading on Friday. GBTC is one of the most liquid methods to track bitcoins. As more cryptocurrencies enter the scene, and various government agencies around the world consider ways to regulate digital currencies, these types of drops are inevitable. Additionally, as more exchanges begin offering bitcoin futures contracts, the ability to short the currency will further add to its price volatility.
Bitcoin futures begin trading on the Chicago Board Options Exchange
(11 Dec 2017) It has been a crazy ride this year for the world’s first major digital currency known as bitcoin. The NYSE Bitcoin Index is up in the ballpark of 1,500% this year, and the currency began futures trading on the CBOE on Monday the 11th of December. After crashing the CBOE’s system Sunday night, bitcoin futures opened up around 15% on their first morning of trading. CBOE’s rival exchange, the CME Group, plans to launch its own bitcoin futures operation next week.