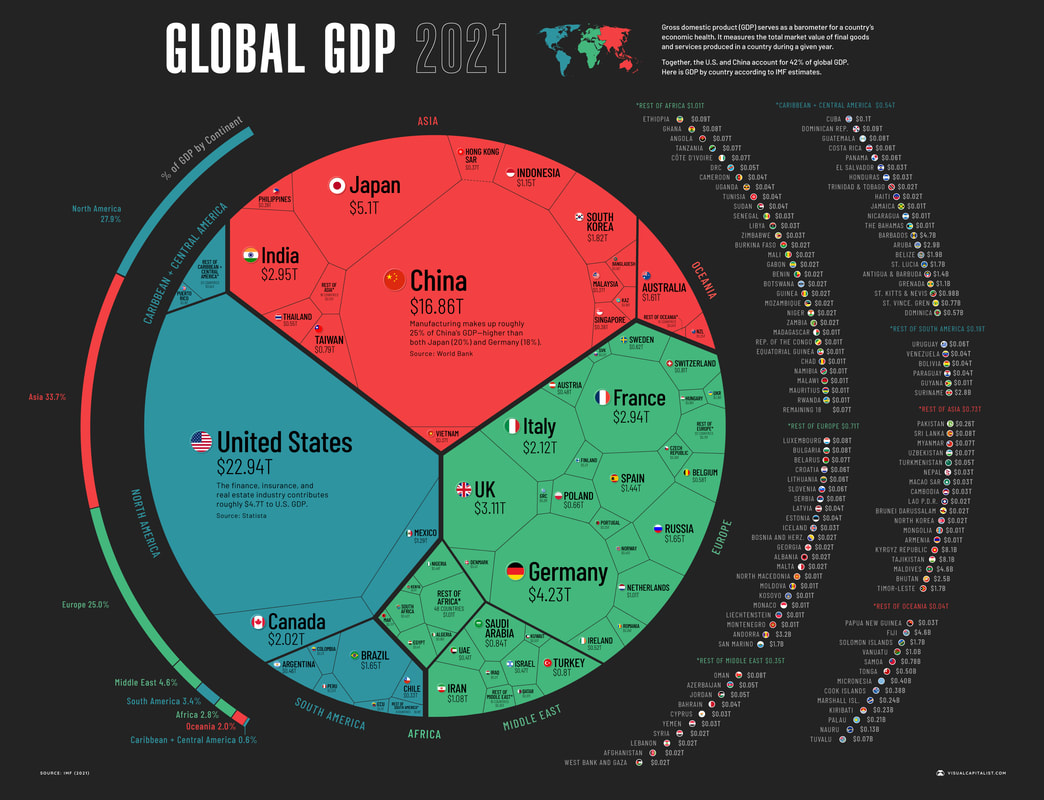 Graphic courtesy of Visual Capitalist
For a fascinating full-size graph of each country's debt-to-GDP ratio, Click Here. Warning, the US is not in great company...
The world's $94 trillion economy, in one stunning graphic
(24 Dec 2021) Few things paint the story like a good visual, and this stunning graphic from Visual Capitalist proves that point. Here, in one snapshot, is a breakdown of which countries are most responsible for the world's production of goods and offering of services. Note that, despite the fact that we are several years beyond the forecast date (from the press) of China's economy surpassing that of America's, the United States still enjoys an economy that is one-third larger than its second-place rival. Pretty amazing, considering that virtually every item we pick up in the store has "Made in China" stamped somewhere on the packaging. In fact, the US accounts for nearly one-quarter of the world's GDP. While the US dominates the North American, China, to a lesser degree, dominates Asia. There are a number of factors we find of interest in the red section. Note how small India's GDP appears in relation to that of China's, despite the fact that both countries have approximately equal natural resources and populations (1.3 billion Indians vs 1.4 billion Chinese). It was just eleven years ago, in 2010, that China's economic might surpassed Japan's, despite the fact that the latter has a much smaller land mass and one-tenth the population of the former. China claims it controls the nation in the lower left portion of the red, Taiwan, and its $790 billion economy; it is a matter of time before they make a move on that country, forcing some type of American/global response. In the green section of the graphic, one notes how small Russia's economy looks, despite Putin's saber-rattling. Furthermore, around one-third of Russia's economy is energy based (and 60% of its exports), making it vulnerable to price fluctuations in related commodities such as gas and oil. Germany has the continent's largest economy, at $4.23 trillion, followed closely by the UK, France, and Italy. As geopolitical events occur around the world, it is useful to think back to this visual, as what it represents almost certainly plays the major role in the action taking place. The world is slowly beginning to wake up to the danger of a Communist China playing such a major role in the world, both economically and militarily (though American military might—and Russian, for that matter—still dwarfs that country's arsenal). China's growth rate is already slowing, and we expect that to continue as the world's companies continue to mitigate country risk by building their factories in other Asian countries. Internal issues are the only reason that the world's largest democracy, India, cannot seem to gain more economic traction, but that is slowly changing. We also expect Latin America to have an expanded economic role in the world over the coming decades.     ​
Nearly one-quarter of all government-issued notes around the world now have a negative yield. (26 Feb 2019) For the minority of economists arguing for more Fed rate hikes, the chief argument has been that the central bank needs to re-stock its ammo pile to be prepared for the next economic downturn. The higher the rates, the more the government can lower those rates to spur economic activity. Compared to the rest of the world, however, it appears that the US Treasury has the largest stockpile of ammo. It is a difficult concept to fathom, but right now nearly one-quarter of all government-issued notes around the world offer a negative yield to investors. $8 trillion worth of bonds around the world will pay investors precisely zilch in interest. That is wrong in so many ways, but here's the most pressing concern: economic activity around the world is slowing, but the central banks will watch their respective economies fall while they sit with their hands tied behind their backs. Japan and developed Europe—especially Germany—are the most at risk, in our opinion. On the sliding yield curve, you would have to go out eight years to find a German bond yielding anything above 0.0%. On a bright note, Japan's 10-year bond now offers investors a positive yield: 0.01%. Incredible. A lot of blame for the economic slowdown has been placed on Trump's trade battle with China, but global government wonks need to look in the mirror to find the real culprit—it has simply been too easy of an "out" to put new charges on the government credit card. Odds are great that we will see a US/China trade deal reached soon. However, this will not be a panacea for the global debt crisis. Responsible government behavior is the only solution, but—from Brussels to Tokyo to DC—when is the last time we saw that manifest in a real and lasting manner? ​​
(04 Apr 2017)  Global debt hits unthinkable (and unsustainable) $215 trillion.  The Institute of International Finance (IIF) is a global association of financial institutions that was born out of the international debt crisis of the early 1980s.  The group just released a report on the current level of global debt, and the figures are staggering.  A decade ago, the world was awash in debt to the tune of $65 trillion, with the US accounting for about $8.5 trillion of that amount, or 12%.  Today, global debt levels have reached an almost-unfathonable $215 trillion, with the US accounting for $20 trillion of the figure, or 9.3%.  Put another way, global debt is now equal to 325% of global GDP.  Should we celebrate the fact that we now hold a smaller percentage of the world's outstanding debt load?  Umm...no.  Both figures are unsustainable and are a threat to global peace and prosperity.  Now, take a look at the leadership structure in places like Europe, and form an opinion on whether or not the problem will be solved or exacerbated.