(21 Mar 2018) On Thursday, the White House will outline a new package of tariffs to be placed on China in retaliation for that country's egregious intellectual property theft over the past several decades. In essence, any company wishing to do business in the lucrative Chinese market must "agree" to a thorough dissection by government officials, who then share the intellectual property gleaned from those US companies with their Chinese competitors. While the president has advocated for tariffs on $60 billion or so worth of Chinese goods, odds are it will not get to that stage—China has a lot more to lose in a trade war than does the US. As for all of the naysayers screaming about the harm that will be done to US markets, their silence up to this point (with respect to intellectual property theft) has been deafening. Perhaps they have been busy behind their ivory towers writing peer-reviewed articles on the subject, presenting their findings at black tie cocktail parties.
President Trump announces big tariffs on steel, aluminum imports
(01 Mar 2018) All the bluster finally came to fruition. After meeting with the CEOs of several major American producers, President Trump announced that the US would impose a 25% duty on steel, and a 10% duty on aluminum coming into the country. While the market has been on hair-trigger alert recently, announcement of the tariffs was the catalyst for a 600-point drop in the Dow within minutes. That being said, the major indexes had been down since the open, and the Treasury yield/interest rate issue is a much bigger specter for investors. Other countries such as China and Mexico immediately threatened retaliation, but the threats are muted by the massive trade imbalance the US has with those countries; in other words, we import a lot more than we are allowed to export, thanks to other countries' protectionist trade policies. We hate tariffs, but that doesn't make the unfair trade practices of other countries any more palpable.
President finds an odd defender with respect to new tariffs
(25 Jan 2018) Former Vice President Al Gore admits he doesn't find much common ground with President Trump, but he did come to his defense at Davos this week with respect to recently-announced solar panel tariffs. A little background: the Trump Administration placed hefty fees on washing machines and solar panels coming into the United States, responding to complaints filed by US companies such as Whirlpool (WHR), SolarWorld, and Sunviva. Let's leave the washing machine debate aside for now, and focus on the solar panel issue. The Chinese and South Korean governments have been heavily subsidizing makers of solar panels in those countries for the express purpose of dumping cheap panels in the US. This has been done in an attempt to knock US solar panel manufacturers out of business. We hate tariffs, but these subsidies eliminated any semblance of free and fair trade. Gore said as much in a panel discussion at the World Economic Forum in Davos, adding that "...this case did not really start with him (Trump). This was a trade action brought by private companies." The bipartisan US International Trade Commission made the recommendation, and the Trump Administration had 90 days to either implement or set aside the ruling. 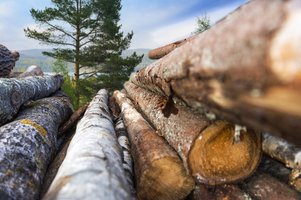 (25 Apr 2017)  Trump plays hardball with Canadian wood dumping.   For decades, certain provinces in Canada have allowed loggers to cut down trees and "dump" the commodity south of their border at a loss.  The purpose was to corner, as much as possible, the timber market and quash US logging companies.  President Trump has taken notice of this tacit practice, and has sent a warning shot—in the form of a 20% tariff—back up north.  This is strictly a negotiating tactic (but nobody tell the press, because they remain clueless) with the upcoming NAFTA renegotiations in mind, but it is also another symbol that their is a new sheriff in town.  What is the CNBC headline?  "Is the US triggering a trade war with Canada?"  You little cowards represent the antithesis of the spirit that built this country.
(31 Mar 2017)  President signs two executive orders related to trade.  The United States has, by about double the second-place player, the largest economic engine on the planet.  Last year, however, we brought in half-a-trillion dollars worth of goods over and above what we exported.​  Forget the excuses and the false narratives written by the mainstream media or the likes of the über-leftist Economist magazine, it doesn't need to be this way.  We got here due to a complete lack of negotiating skills with respect to trade deals, giving up everything including the kitchen sink—those are now made in Guangzhou, China.  Today, President Trump  the first step toward rectifying our current balance of trade.  The first executive order signed commissions a report on every trade partner with which we operate a trade deficit; why we have the deficit, and what can be done to reduce or eliminate it.  The second order seeks to deal with the $2.3 billion the US is still owed in duties from the "dumping" of cheap goods on our soil for the purpose of undercutting US manufacturers.  It's a start.
​(20 Mar 2017)  US Treasury Secretary forces change at first big global trade meeting.  There's a new sheriff in town, and that became evident at the G-20 global economic summit in Baden-Baden, Germany this weekend.  In a clear defeat for globalists, especially those in host-country Germany, US Treasury Secretary Steven Mnuchin forced a re-write in the policy statement coming out of the meeting.  Fending off a concerted effort by the other members, Mnuchin had a disavowal of protectionism clause removed from the document, and had a pledge to fight global climate change yanked out as well.  The new language on global trade gives each nation the right to look out for its own best interests.  China vehemently opposed the language changes, which is truly rich, considering their continual manipulation of the rules.
(27 Feb 2017)  After petulant antics, senate finally confirms Ross for Commerce.  Over a month into President Trump's tenure and he finally has a Commerce secretary.  For all of the bluster and delay tactics, billionaire Wilbur Ross was confirmed by the US Senate in a 72-27 vote.  Ross will be Trump's go-to cabinet member with respect to global trade, which makes the childish antics of some in the senate all the more disgusting.  Then again, they are still holding up the confirmation of Senator Dan Coats for Director of National Intelligence.

​Ford, GM driving in different directions with respect to the President-elect


​(03 Jan 2017)  General Motors (GM) didn’t waste any time.  On November 9th, just one day after the election, the company announced that it was laying off 2,000 workers at plants in Ohio and Michigan—two states that helped Donald Trump defy the odds and become the 45th president of the United States.  Not only did the states swing right, but so did the two blue-collar counties in which the plants were located; two counties that were highly expected to back Clinton.  Coincidence?  Perhaps.  But General Motors, which blew through $11.2 billion of taxpayer money, has made it clear that it would rather fight the incoming administration than talk about keeping jobs in the US.

Then there is Ford (F).  The one “Big-3” US automaker which did not take a taxpayer bailout is sounding a strikingly different tone.  This week the company announced it was canceling plans to build a new plant in Mexico, and invest $700 million in its Flat Rock, Michigan plant instead.

But CEO Mark Fields didn’t stop there.  He said that the change in plans was a “vote of confidence” in the pro-business environment of the incoming administration.  It was just last year that Ford said it would invest $1.6 billion in Mexico.  The investment in the Flat Rock plant will be used to produce more electric and self-driving vehicles.

As for GM, the President-elect’s tweets made his feelings clear:  “General Motors is sending Mexican-made model of Chevy Cruze to US car dealers tax-free across border.  Make in USA or pay big border tax!”  Will the firm remain obstinate in the face of such public criticism by the incoming president?  Time will tell.