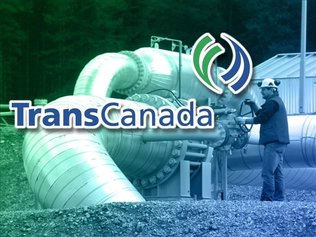 (24 Mar 2017)  US State Department gives final permit to TransCanada for Keystone Pipeline.  The Trump Administration has issued final and ultimate permission to TransCanada (TRP $37-$46-$50) for the construction of the Keystone XL Pipeline, which the former president buried two years ago.  The pipeline could ultimately transport around 1 million barrels per day of crude from Canada to the US.  TRP was up 4% in pre-market trading on the news.

(06 Dec 16)  The Dakota Access Pipeline (DAPL) is an 1,172-mile, 30-inch diameter pipeline that will connect the robust oil fields of the Bakken and Three Forks production areas in ND to the Midwest.   Domestically produced light sweet crude—nearly half a million barrels per day—transported in a safer manner than any other method (rail or truck); what could possibly be wrong with that?

Anyone watching the news over the past month is familiar with the protests which have been going on at the Standing Rock site in North Dakota.  Now, despite being approved at every point along the way and nearing completion of the pipeline, the US Army Corps of Engineers suddenly refused to give a permit for the tiny segment of the line which runs under Lake Oahe (running lines under bodies of water is a common and safe practice).  This was not a logical decision, it was a political action.  Furthermore, it has emboldened the protesters, many of whom were part of the “rent-a-mob” crowd.

Let’s take a look at the facts of the case.  The previously-approved stretch of pipeline (50 tribes were consulted and their concerns resulted in 140 route adjustments) would run 100 feet below the Missouri River, adjacent to an existing underground natural gas pipeline.  The Standing Rock Sioux has relocated its drinking water source to a site 70 miles downstream from the challenged pipeline location.  Their new source is just 1.6 miles downstream from an elevated railroad bridge that carries crude oil-laden tanker cars (huh, no concerns there).  Oh, and there are at least a dozen other points upstream along the river at which pipelines transport crude or other refined products.  Odd we haven’t heard these facts on the news.

There were, no doubt, some truly concerned citizens from the area taking part in the protests, but the interloping community activists didn’t take long to show their true colors.  Immediately after the Corps of Engineers’ decision, they vowed to continue shutting down pipeline activity across the country.
​
As is so often the case, the mainstream media gives one side of the story, fomenting anger and hatred in the process, and then moves on to the next crisis to exacerbate.  In the end, this $3.8 billion pipeline will have its last little section completed, and Midwesterners will be the beneficiary of cheaper, domestically-produced and refined gas.
The Administration’s War on Low Oil and Gas Prices
​
(10 Nov 15) It appeared choreographed.  On one day, the administration put the final nail in the coffin of the Keystone Pipeline, which would have transported nearly one million barrels of crude per day to the United States; on the next day, the DOT’s Pipeline and Hazardous Materials Safety Administration reaffirmed that expensive new brakes must be placed on trains hauling gas and oil.  Since the argument against Keystone was not centered around the safe transport of crude, it is hard to come to any other conclusion than this: the administration is waging war against reasonably priced gas for American consumers.

It was well-telegraphed that “renewable resources” (picture those attractive solar panels and giant windmills dotting the fruited plain) had become the fantasy energy panacea in the eyes of the administration, but few have the backbone to tell it straight: the higher the price of fossil fuels for the consumer and American industry, the easier it would be to shove the green energy malarkey down our throats.  The administration would love to see $10 per gallon at the pump as much as our enemies in Russia and the Middle East would.  It furthers their agenda.

Will fossil fuels give way, one day, to new energy sources like hydrogen power, biofuels, and advanced nuclear fusion?  Of course!  But in the meantime, could someone please tell the administration that China is now burning as much dirty coal as the entire rest of the world.

(11 Jan 15)  Exactly one year ago, I wrote that, despite his hatred for the pipeline, the president would ultimately do the right thing and approve the Keystone XL pipeline from Canada. Perhaps I had too much eggnog that January; or perhaps I believed that the president wouldn't leave his senate democrats up for reelection (especially those from oil states) out to dry. Whatever the reason, I now see the error of my ways. There is nothing that could be done to get the president to approve the Keystone pipeline, which would create thousands of jobs in a serpentine line from Canada to Louisiana.

The president once told the GOP that if they didn't like the way things were going down, they should "win an election." Wow, harsh. Well, they stumbled and bumbled in and won the 2014 mid-terms. Keystone 1, President 0.

Then it was obfuscation. We were asked if we really needed the pipeline. After all, oil has plummeted in price, and the unemployment rate has fallen to 5.6%, so who needs those extra jobs? Besides, TransCanada (would-be builder of the pipeline) was already working on another route across Canada and entering the US east coast, avoiding the need to "devastate the ecosystem of the United States" (per a Friends of the Earth fact sheet). But wait a minute. What about the rail accidents involving the transportation of Canadian crude down to the Gulf region of the US? Wouldn't a pipeline be a lot safer? In fact, the president's second ace in the hole (after "win an election") was the state department's pending study of the ecological impact of the pipeline. Much to the amazement of everyone, including us, the State Department reported that the environmental impact would be minimal. Keystone 2, president 0.

Then it was those pesky Nebraska farmers who were suing to keep the pipeline off their lands. Nothing, the president told us, would be done until the Nebraska Supreme Court ruled on their case. Well, guess what just happened? That's right, the court's ruling threw out the lawsuit and gave the pipeline the green light. Keystone 3, president 0.

That would seal the deal, assuming we still had the US Constitution and the rule of law (the balance of powers between the three branches of government) intact. But we don't. Last year the president said "I have a pen and I have a phone." Few Americans realized (or maybe more than we want to admit) that meant he will take his pen, cross out parts of the "articles of negative rights" (as he once referred to the document) in the Constitution that don't suit his fancy, then pick up his phone and dare the GOP to do something to stop him. They won't.

It never really mattered what the people wanted, who controlled the congress, how the Nebraska Supreme Court ruled, or what the State Department study revealed. All that ever mattered was the president, and his phone, and his pen.

There is one thing out of his control (well, besides the unruly electorate which threw another "temper tantrum" in November), and it is this: Despite the president's war on fossil fuels, a miracle has occurred. Much to his chagrin, and Vlad Putin's horror, the price of oil has been halved within six months. Putting a stop to Keystone should have kept the price of oil where the president and the OPEC sheiks say it is "fairly valued" ($100 per barrel), but the president did not realize the amount of oil waiting to be tapped here in the United States due to new technologies, such as fracking. He was unable to stop the use of this technology with his pen and his phone. He was also unable to stop the Chinese economic slowdown, which has crushed commodity prices.

So, within the next few weeks congress will approve the Keystone XL pipeline and send the bill to the president to approve, which he will veto. Congress will not have enough votes to override his veto, and the pipeline will await another president. That is unfortunate, but we will take our "half of fair value" gas prices, and the $85 billion or so we have saved at the filling station, and the thought of a humiliated Vladimir Putin sitting in the Kremlin, and we will smile. And to think that this wonderful series of events actually happened...even without an almighty pen and a magical phone.

The President's Five-Year Leadership Void on Keystone XL
​
(31 Jan 14)  It's ok, Mr. President.  We understand your distaste of carbon-based energy, and we appreciate your forward thinking on renewables.  Just have the guts to stand up and say what you want on the Keystone XL pipeline, which would transport 1.3 million barrels of North American oil per day and generate thousands of American construction jobs.  Just say "NO!"  Or better yet, just say "YES!"  But the Jimmy Carter grimace you have had on your face for the past five years on this subject will not cut it. It is time for leadership.

The last time you put off approval of the pipeline, the Canadian prime minister, a friend to the United States, immediately began talks with the Chinese premier on oil sales.  Canada is going to produce the oil, and someone is going to buy it. Whether that is us or the Communist Chinese is up to you.  You don't even need your "phone and your pen" to unilaterally get this done. Just say YES or just say NO.

You claim that you want North American energy independence, yet your actions belie that message. You claim not to be aligned politically with OPEC, but they are cheering your indecision. You know you don't want the pipeline, but are unwilling to risk alienating the democrats up for reelection this November in pro-oil states. Meanwhile, environmental activists have promised unruly and disruptive behavior across the country if the deal takes place, and you don't want that stain on your legacy. It is a sticky wicket, but indecision is no longer an option.

Your last Jimmy Carteresque move was to wipe your hands of the dilemma and pass it off to your state department. The problem is, they have just reiterated their prior report's findings that the pipeline "will have a minimal impact on carbon emissions."  Darnit. You control these people, how did that finding slip out?!

Here's our bet. As much as you hate fossil fuels and do not want to alienate our "friends" in the Middle-East, you will do the right thing, if for no other reason than the fact that you know Vlad Putin thinks he has you under his spell--and this will really tick him off. The real winners will be the American people, who will see their economy spurred by lower energy costs, and TransCanada Corp. (TRP), which will build the pipeline. That's our bet, but we have been wrong on political issues before. And this issue is all about politics.