​The following headlines have been reprinted from The Penn Wealth Report and are protected under copyright.  Members can access the full stories by selecting the respective issue link.  Once logged in, you will have access to all subsequent articles.
See also: Homes & Durables 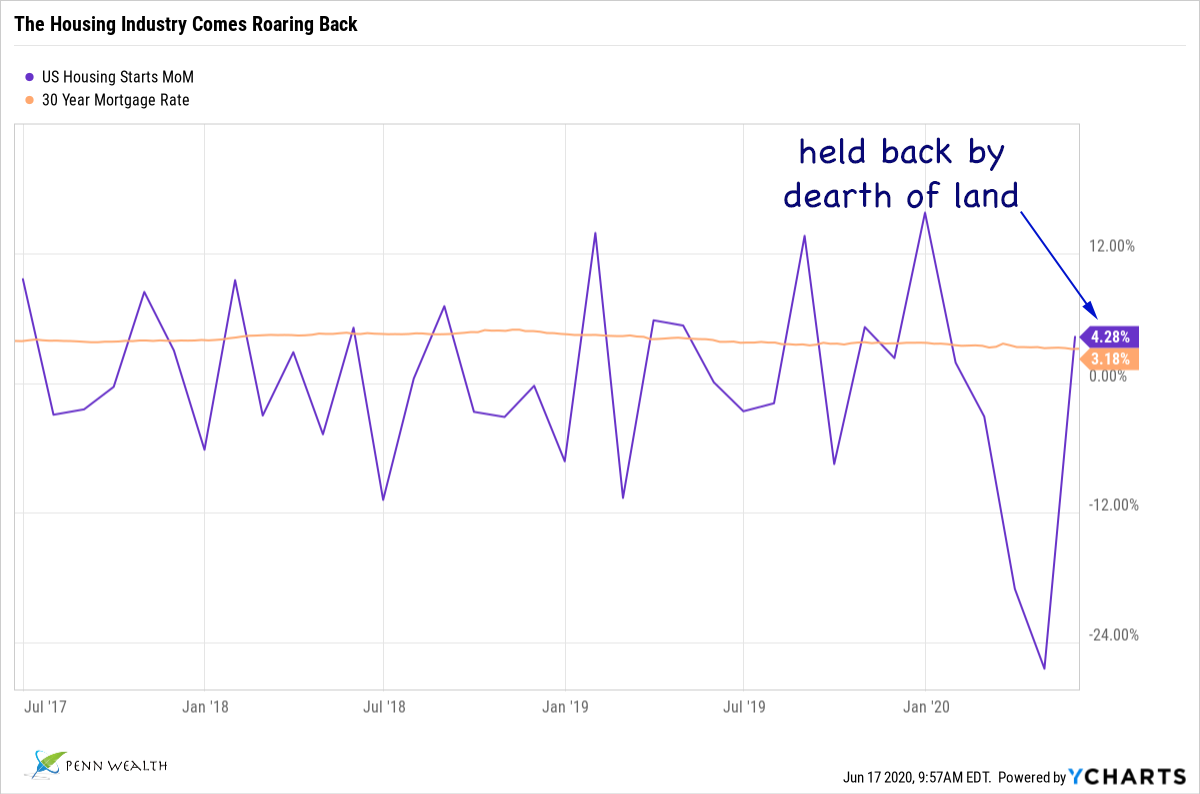 (25 May 16) Just when it seems as though the economy is sputtering along at a turtle’s pace and Americans are hesitant to open their wallets, a report like this comes along.  The Commerce Department announced that new home sales rocketed in April to their highest level since January, 2008—over eight years ago and before the Great Recession seized up the American economy.
Versus expectations of a 1.8% jump in sales, contracts for new homes surged 16.6% in the month to an annually-adjusted rate of 619,000 units—the biggest percentage jump in a generation.  But this was not the only impressive number in the report.  The median price of new homes sold (meaning half were below this number and half above) rose to a record $321,000.  The average price of a new home sold in April rose to a whopping $385,000.

What is responsible for the spike?
Not only are Americans feeling more comfortable about their own job stability, they are also getting a sense that they will not see interest rates this low again for long, long, time.  With the average 30-year mortgage rate hovering around 3.9%, up 30 basis points from one week ago, there is a growing sense that the Fed will soon make their second rate hike in precisely ten years (May of 2006 was the last hike before the Fed moved last December).  We predict a July hike of 25 basis points, even though (or precisely because) there is no Fed press conference after that particular meeting.

What does this portend for the economy?
In the first quarter of 2016, the US economy grew at an abysmal annualized pace of 0.5%—pretty ugly for an economy that should be chugging along at 3-4% per year.  These stellar new-home sales figures should, however, help raise the second quarter GDP number.  Furthermore, the foundation of a housing comeback will be more solid this time around, as the government-induced lower qualification standards for mortgage loans are no longer present.  If a trendline can now be established around the 600,000 annualized new home sales mark, it will be a big shot in the arm to the economy.

As one could imagine, the homebuilding industry will be a key beneficiary to a housing rebound.  In fact, on the same day that the Commerce Department announced new home sales, luxury homebuilder Toll BrothersTOL reported surprise top-line revenue and bottom-line profit in the second quarter, surpassing the rosiest analyst forecasts.  Although TOL’s peers didn’t announce earnings on that day, D.R. HortonDHI, LennarLEN, and PultePHM also spiked on the news.

To be sure, tougher standards and a wary base of potential homeowners led to an explosion of apartment dwellers over the past eight years, but even that may be changing (see “Millennials Fueling Apartment Boom”).  While we are currently neutral on the big, publicly-traded builders, that may change soon as well. (Reprinted from this coming Sunday’s Penn Wealth Report, Vol. 4, Issue 21.  For subscription information, click here.)

(OK, got it.  Take me back to the Penn Wealth Hub!)
Millennials fueling apartment boom—but how much gas is left in the tank?

(28 Mar 16) In the 1940s and 1950s a major demographic shift was occurring in the United States.  In rural areas, which comprised the vast swath of the American landscape, farm life was the norm.  For those living near big industrial cities, however, tenement living was typically the only option.  Increased pay and a building boom changed all of that in the 1940s and ‘50s, however.  Suddenly, home ownership became the American Dream.  The concept of the modern mortgage gave ordinary workers the ability to raise their family in their own home.

Following the implosion of the mortgage industry in 2008, home ownership suddenly went out of vogue for millions of so-called Millennials—those born after 1980.  They flocked to apartment complexes in droves, especially those located in urban areas.  As rents become higher, however, this generation is reconsidering its stance on home ownership.

Their income is also rising, along with crime in the inner cities, and their kids are growing older.  They learned from the mistakes of others and may now qualify for a low-rate mortgage.  For many, the hustle and bustle of the inner city will lose its luster as their kids begin going to the local public school.  Suburbia is back.

(Reprinted from the Journal of Wealth & Success, Vol. 4, Issue 3, from a larger story on the current housing situation.)
Home Building Surges in April

(21 May 15) US new home construction surged 20% in April, the largest percentage increase since 1991 and the highest reading of new starts since 2007.

As the markets enter their “worst six months,” historically, of the year, the housing news helped quell investor fears that the markets have far outpaced true economic activity and are due a pullback.

But what of the great shift away from home ownership and to apartment and condominium living?  While the April figures did show a healthy growth rate in the construction of single-family homes (up 16.7%), the rapid pace of multifamily dwellings continued, rising 27.2%.
Is this really bad news, however, or a sign that Americans are becoming more adept at living within their means?  For the past two generations, the typical American worker has counted their home as a big part of their overall financial portfolio; perhaps the shift into multifamily dwellings will also mean a spike in retirement savings.  Time will tell.

Certainly, low interest rates have had an effect on new home construction and overall real estate activity, which is one of the reasons the Fed has continued to keep rates at historically low levels.  One year ago, the average 30-year mortgage rate was floating around 4.3%—good by nearly any measure.  Today, however, that rate has fallen to 3.85%, enticing more American families to make the plunge.

When rates inevitably go up, economists worry that the number of new mortgage apps will fall precipitously, with a ripple effect being felt throughout the economy.  That is one reason we do not see the Fed pulling the trigger on rate hikes until late this year or early next.
According to real estate firm Zillow, the median home value has risen 3% over the past year, to $178,400.  The firm is projecting another 2% rise in values over the next 12 months.
​
(Read what percentage of the typical American worker’s salary is used to pay the monthly mortgage bill in this Sunday’s Journal of Wealth & Success, Vol. 3, Issue 21.)
LGI Homes Exceeded our Price Target; we are Taking Profits in the Intrepid Trading Platform

(08 Sep 15) On 21 May of this year, 3 ½ months ago, we purchased LGI HomesLGIH for the Intrepid Trading Platform.  The stock price of the company has risen 55.5% since purchase; we are taking our short-term profits and exiting the company.
LGIH is a maker of affordable homes, primarily in cities across the southwestern region of the United States.

(07 Jan 14) According to a report from real estate research firm Reis (REIS), landlords are pushing rents higher as apartment vacancy rates continue to fall. Nationwide, rental prices rose by nearly one percent per month in the last quarter of 2013, spiking the average price of an apartment to $1,083 per month.

As the credit crunch (and the over-extending of credit) forced millions from homes they could no longer afford, many families fled to apartment living, driving the national vacancy rate down from 9% in 2009 to just 4.1% today. Until recently, developers have been unwilling or unable to undertake massive new building programs, but with the economy on the mend the race is on to build hundreds of thousands of new units. In the fourth quarter alone, over 40,000 new units were completed across the nation--the highest pace in over a decade.

While the law of supply and demand will eventually make it tougher for landlords to hike prices, the rate at which the government is pumping new money into the economy means that inflation may take over where the landlord left off. On top of that, real estate experts do not expect rental increases to ever be reversed. One agent likened it to the United States Postal Service announcing a price cut in the cost of mailing a letter, or a state transportation department closing down a toll bridge.

There are a number of interesting factors at work putting pressure on the old adage of the American Dream.  Many former homeowners who were burnt by the drop in real estate values simply do not want to go through that pain again. For others, the tightening credit standards will make it impossible (or at least a lot more difficult) to qualify for a home loan.  Another factor is the aging of baby boomers. At a certain age, many "empty-nesters" are ready to give up the work and capital requirements needed to keep a house in good repair. Additionally, many new real estate developments incorporate apartments and condominiums into smartly-designed communities, complete with shopping and office space. The stigma of apartment living for the American family is largely dissipating. Unfortunately, rental rates are following a quite different path.