Malpractice: (noun) Failure of a professional person to render proper services through reprehensible ignorance or negligence or through criminal intent, especially when injury or loss follows; any improper, negligent practice; misconduct or misuse.
Random House Dictionary. Retrieved May 26, 2017 from Dictionary.com website. http://www.dictionary.com/browse/malpractice

Before the advent of cable news and the mass use of the internet in general and social media in particular, the power of the press rested in the hands of a few elitists with (typically) clouded viewpoints.  While the Associated Press still writes the majority of agenda-driven news for mass consumption by media "professionals," the American consumer now has the ability to see multiple sides of any story.

In this section, we take a look at the more egregious and blatant misrepresentations of truth in the media, and give the reader some tools to use when assimilating the news.  The key is to remember that what is written or produced is not necessarily correct or, at least, presented with full and unbiased honesty.  False narratives—using just enough honesty to insert one's political deception without notice—are abundant within the pages of today's news and financial publications.

Of course, the Jewish groups she cites were vehemently anti-Trump from the start.  Here's a pull quote from the director of one such center:   “The president’s sudden acknowledgment of anti-Semitism is a Band-Aid on the cancer of anti-Semitism that has infected his own administration.”  To use these acts as a weapon to beat the president is beyond sickening.  President Trump can handle this sort of garbage, but it is time to push back against the yellow journalists who foment division...and then squeal like stuck pigs when they are busted. 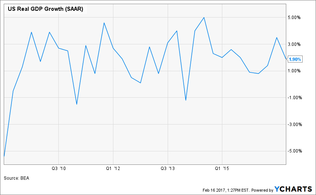 (16 Feb 2017)  CNBC's Sara Eisen's phony tweet.  During President Trump's press conference, he mentioned that he "inherited an economic mess."  True story.  The average GDP over the previous eight years has been around 2% per year, and the "recovery" from the 2008 recession was the most anemic in modern times.  After the president's remarks, however, Sara Eisen at CNBC (@SaraEisen) posted a graph showing the real dollar growth of GDP over Obama's years, not the rate of growth.  Of course, the graph went straight up, just as it would if you had $1 in year one and $1.10 in year eight.  Complete misrepresentation of the truth.  She is too smart for this to have been an oversight.
(Left: The true state of Obama's economy looks like this, not Sara Eisen's false narrative)
(15 Feb 2017)  WSJ reporters claim intel community keeping info from Trump, whom they do not trust.  Carol E. Lee (carol.lee@wsj.com) is one of a handful of Wall Street Journal reporters who have become notorious for projecting their own thinly-disguised political beliefs onto readers.  Through false narratives wrapped with just enough truth to make their claims believable, their articles have become little more than comical bilge.  On today's front page, Ms. Lee and a fellow reporter make the bold claim that the intelligence community is keeping critical information from President Trump due to a deep mistrust.  In actuality, entrenched holdovers from the Obama administration are trying to cause as much chaos and confusion as possible, relying on useful idiots such as Lee to carry their water.  It is time for the intelligence agencies to be fumigated to eradicate the rats and vermin.  As for the mainstream press, they have already done irreparable damage to their profession.
(Photo: WSJ writer Carol E. Lee fist-bumping her bud)
(14 Feb 2017)  Contessa Brewer at CNBC claims Trump hurting veterans with federal hiring freeze.  One of President Trump's most ardent support groups is, without a doubt, the US military.  Perhaps that is why Contessa Brewer (@contessabrewer) at CNBC zeroed in on them with this headline: "Trump's hiring freeze hurts young veterans, who were already having trouble getting jobs."  Really?  Trump came into office running on a platform of creating more jobs, getting better healthcare for American vets, and shoring up our military, and this reporter creates the false narrative that Trump is against vets because he called for a government hiring freeze—except for the military.  This is why you are not trusted, Ms. Brewer.  (Brewer was formerly at MSNBC, and has a history of performing these kinds of stunts.)  Let her, and CNBC, know what you think of political bias disguised as reporting.  @contessabrewer @CNBC