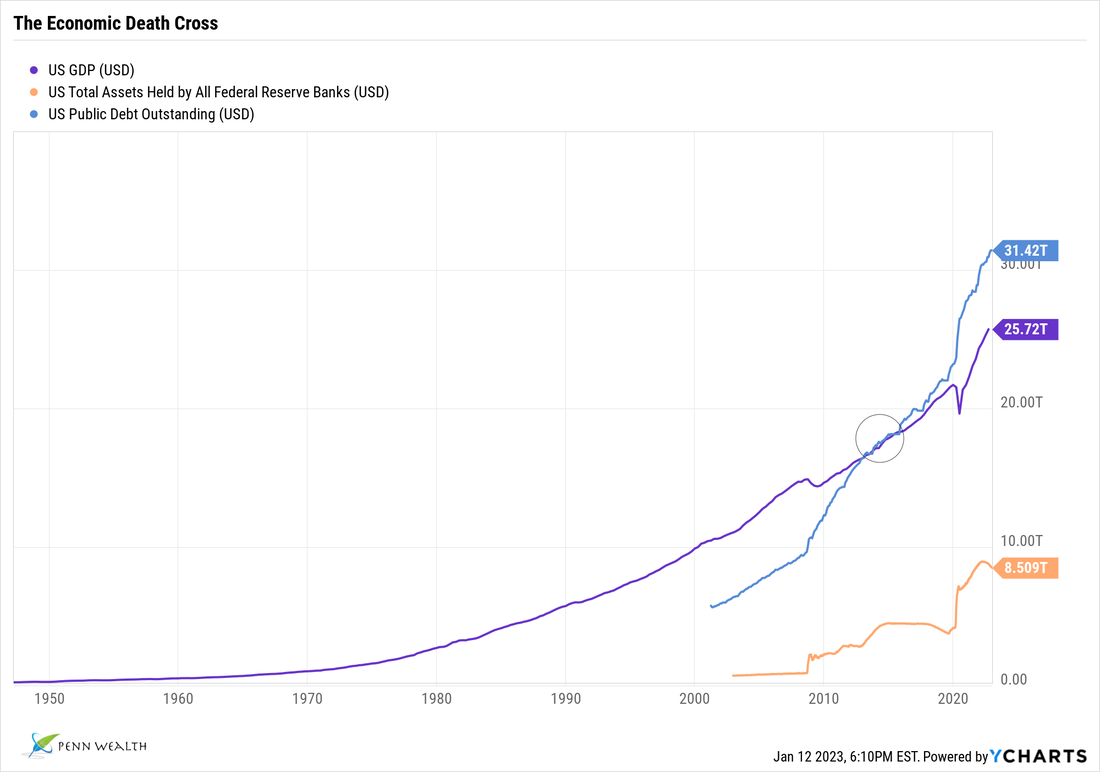 (26 Jan 2022) When the terms national debt, budget deficit, Fed balance sheet, and GDP are thrown around, we suspect that many Americans' eyes tend to gloss over. However, just as every American family should know its financial position at any point in time, it is our duty to understand the basics of how the government is spending our money. Spoiler alert: it is not pretty. Let's start with the national debt, the most eye-popping of figures. As of right now, per USDebtClock.org, the United States is indebted to the tune of $30 trillion. We have been hearing a lot about the Fed's balance sheet lately, which currently adds up to just shy of $9 trillion. The "good news" is that this amount, which is a combination of mostly Treasuries and mortgage-backed securities, is included in the $30 trillion national debt. The Fed has already begun tapering its massive spending program, and aims to actually begin reducing that $9 trillion this year. Per a recent CNBC business survey, the general consensus is that the Fed should be able to reduce its balance sheet by $2.8 trillion over three years, which would bring the total down to roughly $6 trillion. Sadly, that is still well ahead of the $4.3 trillion on its books just prior to the pandemic.

So, this means that our federal debt should be reduced by $3 trillion as well, right? Not exactly. The government has estimated that it will receive $4.2 trillion in revenue in fiscal 2022. Unfortunately, the nonpartisan Congressional Budget Office predicts that, out of the $4.2 trillion in revenue, the government will actually spend approximately $6 trillion. This is fully legal, as there is no "balanced budget" amendment in the US Constitution. This means that, in one single year, the United States will have a budget deficit of $1.8 trillion, more that offsetting the Fed's planned balance sheet reduction. Of course, interest must be paid on any debt load ("servicing the debt"). A full 7.3% of all revenue collected by the US government, or some $305 billion, will be needed to service the national debt this year. And that is with historically-low interest rates. As interest rates rise, that 7.3% will grow, and grow, and grow.

Gross Domestic Product, or GDP, measures the total value of goods and services produced in a country in a single year. For the United States, that figure is sitting right at $23 trillion—far ahead of second place you-know-who, and certainly the envy of the world. The debt-to-GDP ratio is easily determined by dividing the amount of debt a country owes by the amount of its GDP in a given year. For historical perspective, America's debt-to-GDP ratio at the time of the Stock Market Crash of 1929 was 16%; upon entering World War II it was 44%; during the 1973 oil embargo it was 33%; and during the 9/11 attacks it was 55%. In 2012, something ominous happened; an economic "death cross," if you will. That is the year our national debt overtook—chronically and perennially—our GDP. Right now, America's debt-to-GDP ratio sits at 130%, and projections have that figure steadily rising over the coming years. For comparison, Venezuela's ratio is 214% and the United Kingdom's is 85%. China's debt-to-GDP ratio in 2021, according to the IMF, was roughly 70%. That country has responded by growing its spending by the weakest rate (0.3% y/y) in nearly two decades—a feat much more easily accomplished in a one-party communist dictatorship than in a representative republic.

And there we have it: a quick and dirty guide to federal debt, balance sheets, budget deficits, and GDP. Understanding these numbers and ratios is the first step in solving the problem. The next step is actually admitting that these numbers represent an unacceptable condition and will ultimately lead to an existential national threat. The third and fourth steps involve brainstorming for solutions and then implementing actions which will increase income and reduce expenditures. It is time to hold those in charge of the national credit cards accountable for their actions, and to demand more responsible behavior. But that would take yet another "stick" (in addition to a balanced budget amendment) in the form of mandatory term limits.